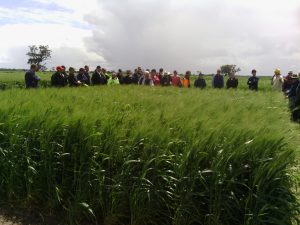 Although the weather was wet and cold many attended from SE, Victoria & NSW the SE/Victorian Crop Walk. The day began with a BBQ at the Jolpac site; from there we looked at the Durum versus Bread wheat trial sites conducted by Nathan Tink & Jason Able.

The next sites were the Mackillop Group Trial site at Wolseley, here Charlie Crozier, Mackillop Group, was comparing the Gross Margins between Durum Wheat, Bread Wheat and Milling Oats.

Over the border at Kaniva at the NVT site Amanda Pearce spoke about the Durum Wheat CIMMYT lines trials, which included varieties of New Bread Wheat, Barley & Pulses