The Southern Australia Durum Growers Association Inc or SADGA is a not-for-profit, membership based, single commodity group whose mission is to promote the quality and quantity of durum grain production in Southern Australia.

2020 marked the 30th year that the first durum crops were commercially grown in South Australia.  In 1990 twelve growers each multiplied two tonnes of the variety Yallaroi in order to produce 500 tonnes of seed. In 1991 was distributed amongst another 40 growers to produce 13,700 tonnes.

Now in its 30th year, the South Australian Durum Growers Association, as it was known when it was formed in 1991, has maintained a major role in communicating the release of new varieties, and for the provision of clean quality seed for the durum industry at affordable prices.

In 2013, the name of the Association was changed to The Southern Australia Durum Growers Association Inc., to reflect the growth and involvement of the West Wimmera region of Victoria in the production of durum wheat.

The association is governed by a committee of volunteers who represent durum growers across the durum growing regions in South Australia and the West Wimmera.

What does SADGA do?

SADGA grows and supplies pure certified seed for growers in Southern Australia with oversight and quality assurance provided by independent agronomists. DBA Aurora, DBA SPES, and DBA Artemis are currently grown by SADGAs seed multipliers. Seed is tested for purity and is provided to growers either in bulk direct from the paddock or collected cleaned from Bute or Manoora.

The other main activity of the association has been the development of a research program, funded primarily by GRDC and SAGIT but augmented with funds provided from agribusiness sponsorship (grain marketers, breeding companies and industry suppliers).

For the group’s entire existence, the University of Adelaide has been closely associated with SADGA. In the early days, research was driven by SADGA (Neville Sharpe), University of Adelaide (Tony Rathjen) and San Remo (providing the funding). This relationship has enabled growers and researchers to connect with one another and allow the industry to grow and stabilise. A highlight of the past decade has been the release of six new durum varieties for the southern region of Australia, which has fostered new growers to evaluate durum for the first time. Starting with Tjilkuri (2010), this release was closely followed by WID802 and Yawa (both in 2012). While these three varieties were an improvement to what was on the market at that time, it was not until the step-change variety, DBA Aurora (2015), was released that growers enjoyed significant yield and quality gains. DBA Aurora still currently maintains market dominance, even though two other DBA varieties, Spes (2018) and Artemis (2019) have been commercially developed and released for the southern region of Australia.

SADGA hosts two forums and two cropwalks for members and industry supporters. These events provide up to the minute data of new release durum varieties and trial results from field trials and associated chemical methods in which to reduce disease and weed pressures to durum and other cereals and legumes within the cropping rotation.

The association recognises the support of sponsors with the opportunity to speak at forums and cropwalks held each year in both the SA’s Mid North, Upper South East and Victoria’s Wimmera.

Past research has included durum variety trials, work on nutrition to maximise quality, weed reduction and to assist the research and development of varieties with crown rot resistance.

For over ten years, SADGA in collaboration with SAGIT & GRDC together with in-kind contributions from researchers and our generous sponsors have contributed $845,658
to valuable Durum research.

Research currently being conducted by and for SADGA includes:

Where do I find SADGA information?

Newsletters and industry information is periodically distributed to the durum industry and member network.

Information about SADGA membership, sponsorship, forums, field days/cropwalks and varieties can be found on social media via facebook @durumgrowerssa and twitter @durumgrowers and on the web durumgrowerssa.org.au. 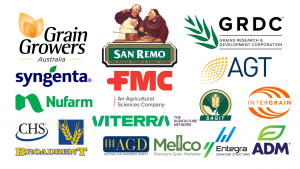